We’re all adults here. So let’s take a second to make sure we’re on the same page.

It makes perfect sense to teach our kids that there’s no such thing as a stupid question. It probably makes them more likely to engage in the classroom and ask for help when they need it. But since we’re all grown-ups, we can drop that old adage, square up our shoulders, and get real for a minute. 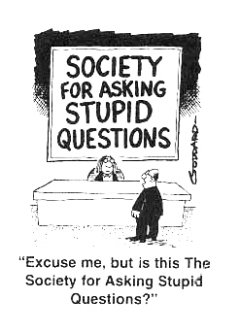 We’ve heard them. We’ve asked them. And when they rear their tiny little heads on the phone, stupid questions kill calls.

As you practice asking insightful, targeted questions, see if you catch yourself asking any of these counterproductive questions instead.

“Why” questions are all the rage on the sales-osphere these days. And I wouldn’t dare hate on a good “why”. But then, there’s the Child’s Why.

Think of the “why” questions that kindergarteners sometimes ask – the ones that annoy the hell out of their parents. The ones that parents don’t know how to answer, because the question lacks fundamental understanding of how the world works. The ones for which there is no good answer.

That’s the Child’s Why.

Let me give you an example. Have you ever heard a cold call that goes something like this?

Prospect: “You know, there’s a lot of pressure right now to improve our top line.”

Salesperson: “I totally understand. Why is boosting your top line important to you?”

Prospect: *Uncomfortable laughter* “Because then we’ll make more money. What do you mean?”

Salesperson: “Yea, of course. Like how would that help your business?”

Prospect: “Are you asking me how making more money would help our business?”

If you use your “whys” strategically, they’ll help you uncover depth in your prospect’s pains. If you don’t, your prospect will perceive that you don’t understand her business. As a result, Child’s Whys can obliterate your credibility.

Here’s a good rule of thumb: never ask any question to which you don’t genuinely want to know the answer.

Like the Child’s Why, The Gotcha Question comes from a good place.

Salespeople realized that when it comes to the buying process, prospects weigh their own words more heavily than the salesperson’s, even if they’re saying the same thing.

There’s a salesperson’s axiom that sums this up perfectly.

Your conversation is not about what you want to hear. It’s about what the prospect wants to say. So take a genuine interest in what your prospect says, think about how it might relate to your value, and ask away.

The Backfire. This is a question where there are a number of answers that could hurt your case rather than help it.

Consider an example I noticed just this past week. A sales rep was presenting on his company, which had strategically decided to limit the analytics its software would offer customers. The analytics, the company determined, were more likely to distract from the company’s value proposition than bolster it. And yet, what did the rep ask his buyer?

“What analytics would you find most useful here?”

As you might expect, the buyer began asking about analytics, and down a rabbit hole they went. The rep spent more time backtracking than selling.

To avoid Backfires, make sure every question you ask passes the following test.

Strong questions will lead to your strengths, create positive momentum, further the qualification process, and come from a place of sincere confidence.

What’s the easiest way to ask better questions? It’s to stop asking stupid ones. Keep your eyes open for the Child’s Why, the Gotchas and the Backfires. If you’re able to remove these questions from your calls, your prospects will immediately treat your calls with more respect.

Yours on the grind,